Occasionally technology evangelists proclaim automation/machine intelligence is capable of fully replacing human staff. While sometimes this can be true - they are forgetting the practical & earned knowledge that clinicians carry around that is very difficult to replace.This is why ThoughtWire is a huge proponent of augmented intelligence - using technology to enhance - not replace - human intelligence.

Nurses and clinicians have years of that tacit knowledge that has developed inside of them from practice and experience - the hardships, all the good times, everything to really build them into that one individual capable of handling a variety of dynamic situations.

How does augmented intelligence develop and complement their clinicians tacit knowledge?

As an example, in a crisis situation - knowing how to use your existing data and resources to gauge what's important - if you've got an augmented intelligence system that's able to gather some of that data put it up in front of you, and say "here's this cluster of information you need to be thinking about ". Early warning scores help us recognize when people are developing sepsis associated with an infection, and and just having that number may be enough to say OK here's a list of the most common conditions that usually have it - so the staff is not manually ruling things in or out before deciding on possible solutions. They can make more clear, and concise decisions.

You've taken some of the guesswork out of it - and that's that situational awareness that would be able to complement what they're seeing in the frontline.

We're going to be data wealthy here in the future - but the existing problem is we're very information poor, and in some cases there is knowledge droughts. You ask yourself - "how can we have so much data and be information poor or lacking in knowledge".

This is again where going through that data pulling out critical elements displaying the kind of things that are needed at the time - rather than somebody spending hours sifting through is so important. Whether it's coming from automated machines, such as Internet of Things type devices or personal devices/wearables - we get to use that tacit knowledge by ensuring that we have the information and are able to supplement/build on that knowledge.

The faster you do that - the easier it is for doctors and nurses to use that intuition to be able to make decisions that are required very quickly. That's the heart of augmented intelligence. It helps them get to the point where we're not asking the machines to make those decisions themselves, but filter out the noise from the data, turning it into the right information at the right place and time.

Watch the full webinar with Healthcare Informatics on Augmented Intelligence in healthcare.

Schedule a demo to see our Smart Hospital applications in action. 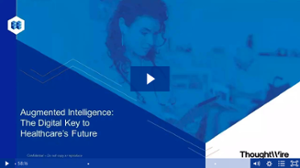 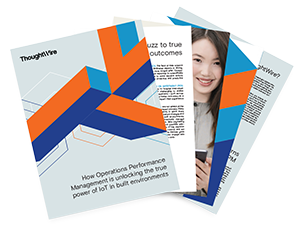