ThoughtWire Turns 10: Looking Back at Where it All Began

August is a celebratory month for ThoughtWire: it marks the company's 10-year anniversary.

Founded in 2009 by its three co-founders, Mike Monteith (CEO), Stephen Owens (CTO) and Dale Hall (EVP), the past decade has been characterized by growth, transformation and, of course, many memorable moments along the way.

Let's take a look at some of the events that shaped the company into what it is today.

Like many emerging companies and startups, ThoughtWire took shape around a kitchen table.

Mike, Stephen and Dale, having previously worked together, realized early on they shared a common vision for the future: that there was a better way for people to engage with information to improve daily life.

After many days and weeks of conceptualizing their vision, they landed on a plan. Pretty soon, the trio had their very first "data center" running in Mike's basement and they were on their way to developing a proof of concept for the same technology that still informs ThoughtWire's platform today.

Mike recalls: "The summer of 2009 was one of the nicest summers I can remember. With a family of cardinals nesting in my backyard, I spent the entire season outside, talking on the phone with potential users of our technology or Stephen and Dale. It was one of the most rewarding and creative periods in my entire career. At that point we had no idea what was in store for us! Looking back 10 years, I don't think we would have gotten to where we are today if we didn’t have the initial time to think deeply about our future and the future of technology, integration, user experience and work."

Even in those early days, ThoughtWire's goal was to be a partner that listens, and to develop technology that changes people’s lives for the better. More specifically, Stephen says, "Our founding thought was that contextual awareness could provide an architectural foundation on which to bridge the human-machine gap, described at the time as 'human middleware'. This came out of a challenge that many people faced where individuals needed to work harder because machines couldn’t talk to each other sufficiently".

As more data was being generated in complex environments the overhead cost of integration, people’s time and lack of interoperability was hindering progress. Our vision was to help create environments where people had access to the most comprehensive set of information and situational awareness without the overhead cost in time and resources of rigid integration projects. The resulting vision was a truly smart built environment where you could orchestrate data from a variety of systems and deliver the right context to the right people at the right time. 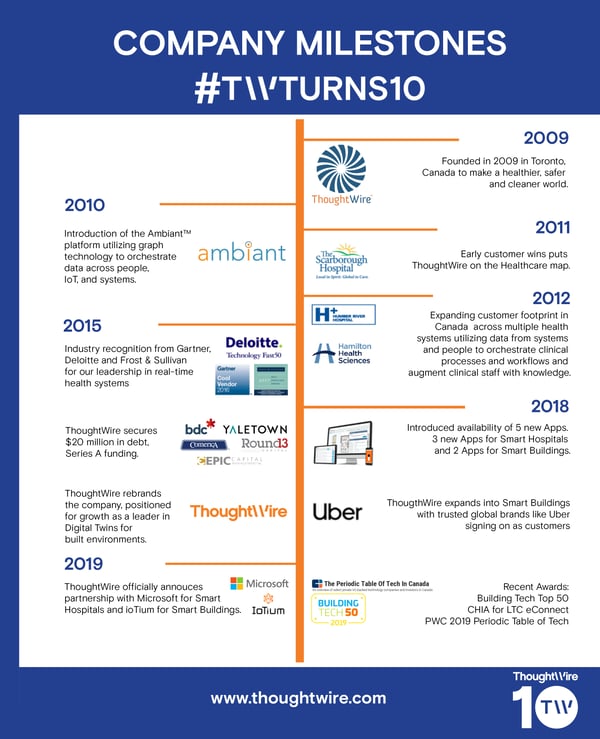 Bringing this grand vision to reality however was no easy feat. Like many companies that endeavour to bring about change, ThoughtWire encountered their fair share of challenges and obstacles along their journey.

Dale recounts a particular meeting in the early days where an executive at a major software company told them -- in no uncertain terms -- that their idea would absolutely never work. Mike explains, "Most of the major obstacles we faced were a result of being one of the first companies to go to market in our space. In fact, it's only since 2018 that digital twins have entered the mainstream with more and more organizations realizing their potential in solving some of the challenges associated with data diversity and integration. We were talking about these concepts well before most people."

Naysayers didn't stop the team. Holding true to a strong belief in their vision and technology, they persevered. "There were a lot of signs in the industry that we were right about the need for our technology, and also that our approach was better than any of the incumbents," says Mike. "In fact, most of the existing technologies at the time, which were deemed 'good enough', are now on their way out of mainstream use -- technologies like ESBs, Web Services, Mashups and more. They were never able to live up to their touted value. We always knew the benefits of our approach, and I'm glad we kept going to bring it to market."

The founding trio all agree that getting their first office space was an exciting moment in the company's early days. After 18 months of working around the kitchen table, they moved into a space not far from ThoughtWire's current location. The office was where the co-founders hired their first team members and spent hours coding their foundational technology.

"It wasn't glamorous," Stephen recounts. "The building shook every time a truck drove by -- so much so that we missed the earthquake of 2013 because we assumed it was just a garbage truck rolling by!"

Dale remembers walking through the space for the first time, saying with a chuckle, "There were pink feather boas strewn across the floor, and we found out the space was previously used as an after-hours club! Luckily it had beautiful characteristics, with beams and exposed brick wall, so we transformed it into something special."

Our story truly takes shape when you look back at the customers who helped turn our technology vision into impactful outcomes. One of those important customer moments in ThoughtWire’s history was a project with a Toronto-area hospital, where the company was brought in to replace physical whiteboards with electronic ones. "The challenge with this project was that everyone agreed on goals, yet no one knew what the end product would look like," says Stephen.

Having been a proponent of human-centric design since day one, ThoughtWire began the engagement by holding a series of interactive sessions to find out the vision and hear how clinicians wanted to use the whiteboards. Stephen recounts, "We were met with scepticism when we told our hospital partners that we were there to listen and build a solution that was driven by their needs. They were used to adapting to new technology, rather than having technology adapt to them."

ThoughtWire pushed forward, integrating their ideas, feedback and requests into the product. Once the hospital staff realized ThoughtWire's dedication to the process, the magic began. It was an exciting, collaborative and creative process. When it came time to implement the electronic whiteboards, Stephen recalls overhearing a conversation between two nurses. "The first nurse sounded frustrated, saying that the electronic whiteboards were just another piece of technology being forced on them by management. The second nurse countered and said, 'No, this is different. We built this.' It was a truly inspiring moment that I'll never forget."

A big push forward in ThoughtWire's growth trajectory came after winning their first Digital Hospital project. Despite the exciting opportunity, there were many challenges with the project. ThoughtWire was brought on late in the process, the timelines were tight, and the scope reached farther than anything the team had done.

The result? ThoughtWire's team stepped up to the challenge and innovated -- fast. Dale recalls, "Even though this was a demanding experience, it pushed us out of their comfort zone and fast-tracked our company to what it is today."

These early wins have turned into lasting happy customer relationships, where our innovative platform now powers applications not only for hospitals but have enabled an expansion of the vision to other built environments such as commercial buildings and even cities.

The past 10 years has been marked by many ups, a few challenges and a lot of great times and memories along the way. The founders couldn't be more proud of what the company has become -- thanks to the commitment and passion that each employee brings to the team and our partners in innovation - our customers. Looking forward, the future at ThoughtWire looks bright.

Stay tuned for Part II of this article series, where we look ahead at predictions for the next 10 years. #TWTURNS10