Thank you all for following along while we looked at the last ten years and the years to come!

We couldn’t have gotten to where we are without the tireless efforts of our team, which is why we’ve been shining a spotlight over the past six blog posts on our longest-serving employees: Jose Nunes, David Faria, Kiril Strax, and Yang Jiao. They’ve told us how they got their starts at ThoughtWire and how different things were back then. We’ve heard about their favourite projects so far and what they’d like to see us do next. We’ve even done some time travel to see how they’d advise their younger selves. 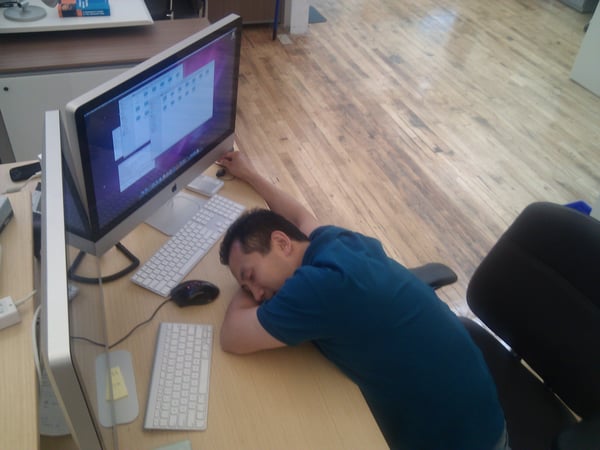 Now let’s end this blog series on a lighthearted note.

What’s a funny story from your time at ThoughtWire you can share?

David, Senior Software Engineer: The best funny story that I have was when we were trying to get the authentication we were using integrated with the identity features of the framework we had at the time. It was supposed to work well for multiple applications, so you could sign into one and it would know you were signed into the others. But they weren't naturally working together. I had to figure out how to get the authentication identity to work with the framework identity, and it was kind of long and gruelling; I had to find a lot of posts and tips from around the web, and it took quite a bit of time.

When I finally got it working, I got so excited that I jumped up in the air and my heel caught the bottom of my chair and flipped it completely over. At the old office the floors were all wooden with undecorated walls and ceilings, so everything echoed super-loud and it sounded like a bomb went off. Everyone kind of jumped out of their office chairs like "Oh my God what happened, what happened" and there I am with my arms in the air shouting "It works! It works! It works!"

Kiril, Software Engineer: At the end of my first interview with ThoughtWire, which happened to be on Friday, Stephen and I went to St. Lawrence market to buy bagels and pastries, which he jokingly admitted to be “one of his favourite CTO responsibilities”.

In our previous office I was in a meeting room at the back of the office once, with doors closed, conducting phone interviews. When I was done and was leaving the room, the alarm sounded. Someone armed the office, thinking nobody else is present. I had 30 seconds to run across the entire office to the panel, and enter my code to disarm it. I just made it in time.

Yang, Director of Customer Success:I have a couple of funny early demo stories that weren't so funny at the time. One of them was that Raph, Dan and I had a live demo one time. While we were talking to the customer, I was fixing the demo system at the same time; implementing a new certificate that had expired so that Dan could do the demo. Dan was also sick that day, so his voice was running out. As I'm typing it's like the time counting down in a Mission Impossible movie. The client's expecting the demo to run, and I'm typing all the commands at the same time. Of course as soon as I fix that, we run into another issue. I ran out of the boardroom, grabbed another network card, switched that out, then the mouse battery ran out. Eventually, after about 25 minutes when Dan had run out of stuff to talk about, we were finally able to do the demo. The customer had no idea.

Jose, Distinguished Engineer: Well, one, which shows my sort of distraction. In the previous building, we were on the third floor and coming up the stairs I was looking at some papers not paying attention and I opened the door on the wrong floor. It turned out that the alarm was on but the door was unlocked. So I walk in, and the alarm goes off, and I look around and of course it's not ThoughtWire. Kind of hard to talk to my son about concentrating and not getting distracted after that one.

Thanks for celebrating our 10th Anniversary with us. We hope you have enjoyed our #TWTURNS10 series of blogs. Please check out our Blog home page to see all previous posts.